By now, you’ve probably heard one of the latest buzzwords in the immigration debate: chain migration. You’ll hear it constantly now. Some horrendous threat that must end in order to move on the #DreamAct. (Plus a wall.)

But how new is it? And what does it actually mean? Humza Kazmi and I investigated.

First, the term “chain migration” exists nowhere in the immigration law. Not in the Immigration & Nationality Act, the CFR, field manuals, memos, or FAQ’s. The term for individuals sponsoring their family members is called (surprisingly): family-based immigration. Our immigration laws only allow spouses, parents, children, and siblings to be petitioned for. You must be a permanent resident or US citizen in order to do it. Sometimes the wait is 1 year or so. Other times, decades. There’s no direct way to sponsor an uncle, grandparent, etc.

​The term “chain migration” has no basis in the law. It is a made-up term. But made up by whom?

Interestingly, the concept was known in Nazi Germany. Propaganda posters showed the multitude of babies born to “inferior” races – and the charts look eerily similar to the ones used by the White House to warn o the dangers of multiplying immigrants. 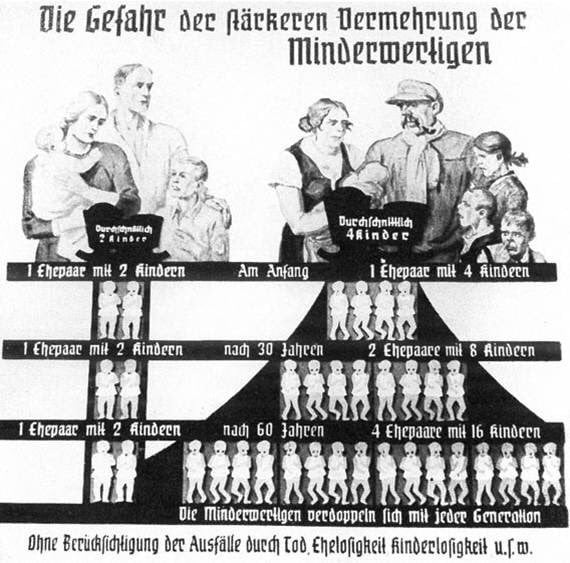 The idea behind chain migration is much older.

​​The term “chain migration” has no basis in the law. It is a made-up term. But made up by whom?

In 2006, CIS (Center for Immigration Studies), in an article by James Edwards, Jr. (of the Hudson Institute) cited Roy Beck and began using the term “chain migration.” CIS, of course, is an alter ego of NumbersUSA and both are tied to FAIR and ultimately their founder, Dr. Tanton, whose private papers I am seeking to unseal in a FOIA lawsuit I filed against the University of Michigan.

CIS began to use the term in more and more and more papers, pushing this #CampOfTheSaints myth that immigrants were just going to take over the world. Terms like chain migration suited the concept very well.

A Google Trends search on the term shows about when Trump first picked it up in November. Now, all of a sudden, it’s a national emergency.

IT IS A SLUR. A dehumanizing slur. Do not accept the framing. A lot of thought went into creating this term, and it goes back a long time.

It completely removes – mock, even – the idea of family unity. Even die-hard alt-right types know it’s hard to sell “End Family-Based Immigration!” So – like “death taxes” – they came up with a much more convenient label. Never mind that it doesn’t exist in the law. (Yet.)

It creates the false impression that an immigrant can immediately bring not only nuclear family members, but extended family members. A US citizen bringing a sibling takes 13+ years. A parent for an adult child may take 10 years or more. The only “quick” ones are spouses, children under 21, and parents of US citizens – they take just over 1 year. Of course, this assumes no delays caused by other reasons, such as the CARRP program for Muslims, lost files, or visa refusals.

I’ve heard Democrats use this term, and this fact has been thrown at me as proof that a) it’s not a racist term, or b) Democrats are racist.

I don’t care who uses it. It’s a racist term, cooked up by those who’ve been clamoring for Muslim bans and ICE raids for decades. Ones who crippled the immigration law, turning it into a lumbering sloth that works neither in the national interest nor, as it stands, by common sense. And we’re supposed to swallow some vague notion of “security” before being graced with an audience to talk immigration reform.

Sorry not sorry. Not buying the white sheet framing. Security comes from prosperity on either side of the border – walls don’t help do that. Don’t say things like “chain migration is what American immigration has always been about.” It’s not. It always centered around families. The least we can do is to honor that and not use a dehumanizing term. Dehumanization, after all, was a necessary precursor to near every genocide in history.

Labels matter. They create frames of thought. Repeating terms like “chain migration” reinforce that frame, limiting discourse to dangerously dehumanizing terms. Break free of the limits imposed by groups like CIS, FAIR, and NumbersUSA when talking about immigration. And learn a thing or two about the actual immigration system and how it (doesn’t) work before opining on what you think immigrants should do.

Previous Article: ENGLISH-LANGUAGE EXEMPTIONS FOR NATURALIZATION
Next Article WHY DON'T THEY COME LEGALLY?