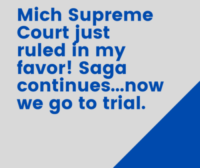 We won! They can’t keep me out!

The University of Michigan has tried for 4 years to keep me out of the courthouse in my quest to unseal the papers of John Tanton, the mastermind behind the modern anti-immigrant movement.

As terrorists attacked the Capitol on Jan 6, we held an oral argument before the Michigan Supreme Court arguing that we are given that chance to unseal the white nationalist’s secret papers. Today, I’m very pleased to report that the MSC sided with us. So while the war is not over, we won this battle, hands down.

What’s great about this win is that, in a rare move on a motion to dismiss, the MSC actually *affirmed* the judgment of the Court of Appeals. That decision was highly favorable to us because it gutted most of the University’s arguments in favor of keeping the Tanton Papers secret.

Now, that appellate decision has the blessing of the Supreme Court. This means that heading into the trial, we’re in a substantially stronger legal position.

Now, we go to trial. And I get to ask for this mysterious gift agreement and hold the University’s feet to the fire. We’ve got a couple of other moves ready which I’m not ready to share just yet,

But I wanted to thank everyone, publicly, for all their support on my quest to shed light on the white supremacy that the Tanton Network has baked into our immigration policy. Like most of my colleagues and co-advocates, I have to spend the majority of my time putting out the fires these groups have unleashed on aspiring Americans throughout the country.

But I decided to focus my advocacy on taking out the flamethrower. No matter who’s in the White House, meaningful immigration reform will continue to fail as long as the Tanton Network has a seat at the table, and that’s why they must be exposed for the eugenicists and racists they are. Exposed for the lies they’ve told the American people about immigrants, for hiding their noxious origins, and for the junk data they’ve peddled on Capitol Hill.

I’m indebted to the folks who’ve been sounding the alarm on the Tanton Network for decades – but as the new kid on the block, I say thank you. Partially – our lawyer Philip L. Ellison, Humza Kazmi, the folks at the Southern Poverty Law Center (current and former including Heidi Beirich Mark Potok Stephen Piggot), Cair Michigan, former Breitbart reporter Katie McHugh, my dear friend Alyssa Milano, other advocates Rick Swartz, Mario Lopez, Devin Burghart, journalists who saw the importance including Nicholas Kulish, Alicia Menendez, Isabela Dias, Niraj Warikoo, Doug Tribou…and so many others who’ve been there with me from day 1. Thank you ALL. (I’m sure I missed a few!)

If sunlight disinfects, today’s decision just ripped the shade off the window. Upward and onward!

Previous Article: Driver’s license for undocumented migrants: Virginia will allow them to drive legally
Next Article What is a TRAVEL VISA ? Get information.